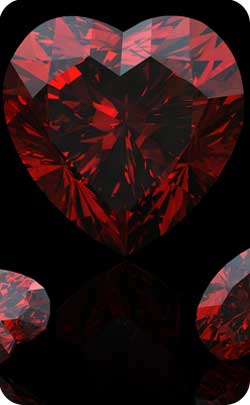 The 2nd year anniversary symbol is also mentioned on some of the Gemstone lists as Garnet.

There’s a lot of background information on garnet. One of the most interesting facts about garnet is that it was believed that it came in every colour except blue, but in recent years there have been cases of it being blue – although it’s extremely rare! Garnet is a gemstone that occurs naturally which makes it even more unique since every garnet gemstone that you have will be different look and feel than any other garnet gemstone. The history of garnet gemstones dates back to thousands of years before the birth of Christ, in or around 3000BC as a matter of fact. During the Bronze age, people used it mainly as a symbol of love and passion by burying the dead with it. As well as this, Greeks used it in battles on their equipment. One of the main reasons why the Greeks had garnet on their equipment was because they believed that it gave protection to whoever was wearing it, along with it being a sign for passion. (which they needed in any kind of battle)

Garnet gemstones have been traditionally associated with Royalty indeed in England in the royal family used the stones within their Roayl robes. Royalty that have worn garnets include Queen Victoria and Mary Queen of Scots.

Most garnets come in a colour that’s quite close to red, but of course you can get them in pretty much any colour that you want. This is why garnet gemstones are associated with passion since it relates to the fiery nature of Aries.

You might be wondering why garnet is often associated with 2nd wedding anniversaries and the answer is very simple. Basically, garnets have always been associated with the number two in the past. So if you’re still thinking about gift ideas for a 2nd year anniversary, I’d recommend that you have a look for the perfect garnet accessory for your loved one. There are many gifts that you could buy that have garnet in it including: garnet rings, garnet necklaces, garnet bracelets and so on. You’ll be spoilt for choice!